456 Unfortunate Dido! So it was true, then, the news that I got.
457 It came to me and said that you had perished, that you had followed through on your final moments with a sword.
458 So your death, ah, was caused by me? But I swear by the stars,
459 and by the powers above—and by anything here that I could swear by, under the earth in its deepest parts:
460 Unwillingly, queen, did I depart from your shore.
461 But I was driven by the orders of the gods, which force me even now to pass through the shades,
462 passing through places stained with decay, and through the deepest night.
463 Yes, I was driven by their projects of empire.

59 Then Venus, [9] intending not to let it happen, in the varied light of the sky, that only
60 the golden thing originating from the head of Ariadne,
61 her garland [corona], should have a fixed place there, but rather, that I too [= the lock of Berenice] might send forth a flashing light,
62 votive prize that I am, originating from a blond head of hair,
63 me, dripping wet from the rough seas of my weeping while heading straight for the celestial zones of the gods,
64 me did the goddess [Venus] situate, in the midst of old constellations, as a new one.
65 For, right next to the lights of Virgo and savage Leo,
66 next to their radiances, and joined to Callisto daughter of Lycaon,
67 I take my turn heading down into the western horizon, ahead of slow Boötes,
68 who plunges ever too late into the deep river Okeanos.

Catullus 66.59–68
The new companionship of the Lock of Berenice with the Garland of Ariadne is a perfect fit, since a garland is meant to adorn a head of hair. And even the blond hair of Berenice, as we just saw it described in Catullus 66.62, matches the blond hair of Ariadne, which is highlighted in Catullus 64.63 at the very moment when she comes emotionally undone, having just been abandoned by Theseus. And the blond hair of Ariadne matches in turn the blond hair of Dido in Aeneid 4.590, which is being cut off at the very moment when she too comes emotionally undone and commits suicide.
So far, I have argued that the lock of hair that gets severed from the head of Berenice and becomes a constellation in the sky is parallel to the Garland of Ariadne. But now I will argue further that the “invitus regina …” verse in Aeneid 6.460, referring to the doomed love affair of Dido and Aeneas, is a “window reference” to a poetic tradition about the doomed love affair of Ariadne and Theseus through the intermediacy of the “invita, o regina …” verse in Catullus 66.39. Through this window reference, the parallelism of Dido and Ariadne comes to life.
Others too have noted the parallelism between Dido and Ariadne as doomed lovers. A prominent example is Jeffrey Wills, who calls attention to the plaintive words of Ariadne in Catullus 64.133, where the abandoned woman addresses the absent Theseus and reproaches him for leaving her all alone in litore, ‘on the shore’ of the island Dia. [10] When Aeneas in Aeneid 6.460 {159|160} protests to the shade of Dido that he had departed unwillingly tuo de litore, ‘from your shore’, Virgil’s words evoke the old poetry about Ariadne, not only the new poetry about the lock of Berenice, which is actually derived from the old poetry about the garland of Ariadne. As Wills observes, “Virgil has now entered into this tradition in an extraordinary way—without mentioning either Ariadne or Berenice. Rather, he reuses language which Catullus has associated with them.” [11]
But the question remains: just how old is the old poetry about Ariadne, as distinct from the new poetry about the lock of Berenice? This new poetry goes back to Callimachus, yes, but even that source is new poetry, I argue, in comparison to the source signaled by Virgil in Aeneid 6.460. In terms of my argument, Virgil’s “window reference” here goes back to an older form of poetry. Like Pelliccia, I think that a lost tragedy by Euripides may be the primary source. What is more to the point, however, is that this source reflects—though perhaps not exclusively—an Athenian version of the myth of Theseus and Ariadne. Whether or not the myth has been worked over by Euripides, the agenda of the myth can be shown to be distinctly Athenian, going back to the glory days of the Athenian Empire.
The myth is attested in a picture painted on a lekythos attributed to the Pan Painter, dated around 470 BCE (Taranto IG 4545). Here is a line drawing by Tina Ross, presented in rollout mode: 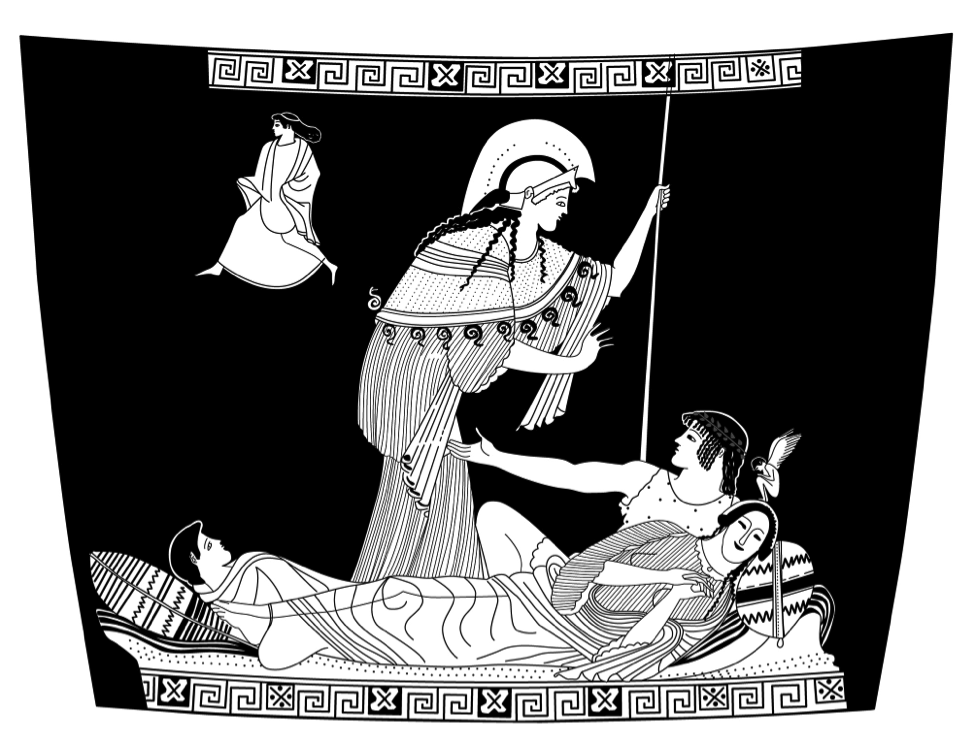 For, since she was about to die neither by fate nor by a deserved death,
but before her day, the poor wretch, inflamed as she was by her sudden frenzy [furor], {163|164}
it had not yet happened to her that the blond hair on the top of her head [vertex], at the hands of the goddess of death,
was to be taken away from her.

Virgil Aeneid 696–699
And just as Dido experiences a Bacchic furor or ‘frenzy’ in reaction to her abandonment by Aeneas, thus showing her incompatibility with the once and future founder of the Roman Empire, so also Ariadne in Catullus 64 is furens ‘frenzied’ in verse 124, experiencing furores ‘moments of frenzy’ in verses 54 and 94. In this reaction, Ariadne shows her own incompatibility with Theseus, that once and future founder of the Athenian Empire. But this same incompatibility translates into a compatibility with Bacchus. More than that, it translates into an attraction, even a fatal attraction, since Ariadne, in her Bacchic frenzy, attracted the attention of Dionysus.
So ends the story of Ariadne. And, as I begin to bring my own analysis to an end, I quote a succinct retelling in Greek. It comes from a description of wine vessels made by the god Hephaistos as a present for Dionysus on the occasion of his wedding with Ariadne:
τοὺς Ἥφαιστος ἔτευξεν ἀριπρεπέι Διονύσῳ
δῶρον, ὅτ’ εἰς Οὔλυμπον ἀνήγαγε δῖαν ἄκοιτιν
Μίνωος κούρην ἐρικυδέα, τήν ποτε Θησεὺς
κάλλιπεν οὐκ ἐθέλων <γε> περικλύστῳ ἐνὶ Δίῃ·
They [= the wine vessels] were made by Hephaistos for most radiant Dionysus
as a gift, at the time when he took to Olympus as his luminous bride
the daughter of Minos, that most glorious one, the one whom Theseus once upon a time
left behind—unwillingly—on that island surrounded by the sea, Dia.
Quintus of Smyrna 4.386–389 [18]
The Greek wording here, showing an unwilling Theseus abandoning his wretched lover Ariadne, raises a final question, anticipated already at the beginning of this essay: would there have been an occasion for Theseus to say to Ariadne the words that Aeneas said to Dido? I quote again those memorable words: {164|165}
invitus, regina, tuo de litore cessi.
Unwillingly, queen, did I depart from your shore.
Virgil Aeneid 6.460
My answer is: yes, there could have been such an occasion. Just as Aeneas saw Dido in Hades after her death when the hero visited Hades, so also Theseus could have seen Ariadne in Hades after her death when this hero too visited Hades. In the Frogs of Aristophanes, we see a parodic reference to a tragic scene featuring the catabasis of Theseus and Peirithoös into the realm of the dead (at verse 142, Theseus is mentioned by name). And we know directly about such a catabasis from a fragment of Hesiod, F 280, describing the experiences of Theseus and Peirithoös in the realm of the dead. These experiences include a verbal exchange between Theseus and the shade of Meleager, starting at verse 10 of the fragment. And here the comparative evidence of Odyssey xi 321–325 becomes vital: when Odysseus experiences his own catabasis by visiting Hades, he sees the shade of Ariadne there, and that is where the story of her abandonment by Theseus is retold. By the same token, Theseus in his catabasis could likewise have seen the shade of Ariadne, now in Hades after her dalliance with Dionysus and her death at the hands of Artemis, and the words he may have addressed to her could be matched most perfectly, Greek to Latin, by the words spoken by Aeneas to the shade of Dido.

The CHS, in partnership with the Minda de Gunzburg Center for European Studies (CES), is accepting applications for its joint…