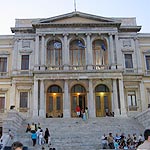 “Athenian Law in its Democratic Context” features lectures by scholars and bulletin boards for discussion moderated by classicists. Until recently Athenian law was generally disdained as chaotic, dominated by rhetoric, and amateurish — especially when compared to Roman law. But in the last twenty years, Athenian law has become a topic of exciting new work bringing together legal, historical, anthropological, and literary research to shed light on both the nature of the world’s first large-scale democracy and, more generally, the place of law in a democratic society.

Join us for a discussion with glass artist Felekşan Onar, and writer and curator Arie Amaya-Akkermans on their collaborative exhibition…