Reading the Classics Behind Bars and Beyond 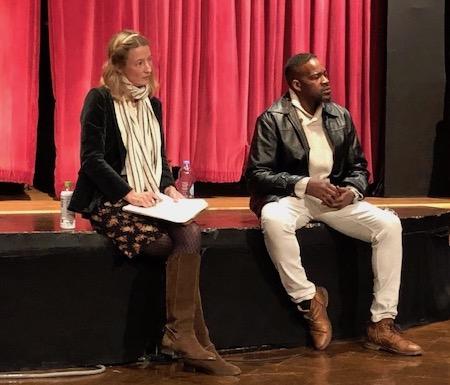 Professor Emily Allen-Hornblower (Classics, Rutgers), with the support of the Whiting Foundation Seed Grant, is moderating an evening of public conversation along with one of her formerly incarcerated students, Mr. Marquis McCray. The evening will include the performance of excerpts from Greek tragedies by two seasoned New York City theater actors, Tabatha Gayle and Martin Lewis. These readings will ground the moderated discussion to follow about the role emotions can or should play in our lives, and the Humanity we all share. This communal conversation will give the formerly incarcerated speaker, the actors, and the audience an opportunity to engage in a dialogue regarding the interconnectedness between all of us that storytelling and classical literature brings to light.

The event is part of the Symposium on Incarceration in honor of Frank M. Snowden, Jr. on February 26-28, 2020.

About the speakers and performers

Emily Allen-Hornblower is Associate Professor of Classics at Rutgers University. She is a graduate of the Ecole Normale Supérieure and Sorbonne in Paris, France, and received her Ph.D in Classics from Harvard University. She has published articles on archaic and classical Greek literature and Roman historiography as well as on the twentieth-century reception of Greek drama. She is the author of the book From Agent to Spectator: Witnessing the Aftermath in Ancient Greek Epic and Tragedy (2016). Her book and articles center on ancient (and modern) conceptions and portrayals of the human: the human condition and suffering; interpersonal relations; and factors of connection (and disconnection) between individuals and groups.

Allen-Hornblower has been an on-air consultant on topics pertaining to the Classics for national television (2014) and for National Public Radio. Allen-Hornblower also has been teaching history, literature, and the Classics in medium and maximum-security prisons in New Jersey for five years, as part of NJSTEP (Scholarship and Transformative Education in Prisons). She is the recipient of The Rutgers Chancellor’s Award for Excellence in Service for her teaching in NJ prisons (2016), and the Presidential Fellowship for Teaching Excellence honors award for outstanding teaching and scholarly work (2015).

A native Mississippian bred on the inner-city streets of Newark New Jersey; during those panicked years from the mid 80s unto the early 90s, Marquis McCray is a “Mass Incarceration” survivor. Like so many peers of his day, this two time felon is one of the multitudes of “Super-Predators” to be captured before reaching the end of adolescence. Yet, to paraphrase Lovelace, the stone walls and iron bars did not make his prison. As he will attest, the real prison was being psychologically ensnared by a believable narrative of a successful life predicated on drugs, power, sex and violence. Miraculously, as if guided by the subtle intervention of the gods themselves, an unexamined passion for the entertaining and easy read of comic books led this speaker on an informative, insightful and ethical odyssey that ultimately resulted in the discovery and rebirth of self…and along with it an appreciation for literacy and literature in general…added to profound respect for the classics specifically.

Tabatha Gayle (she/they) is a multi-disciplinary creator and performer based in New York. She has written, directed, performed in, and helped develop work at off – broadway and regionally at theaters such as Ars Nova, Prelude Festival, HERE Arts Center, Musical Theater Factory, New York Musical Theater, and Virginia Stage Company. Their work centers around intersectional oppression, with a focus on blackness, black women and spirituality. She is currently working on her first physical poetry collection. They are grateful to God for all opportunities to learn and contribute; love to the family. Instagram: @tabathaeverafter, www.tabathagayle.com

Martin K. Lewis (he/him) is an alumnus of Marymount Manhattan College. Recent credits include: REGIONAL – Alabama Shakespeare Festival: Comedy of Errors, Miami New Drama: Our Town (George Gibbs), Elm Shakespeare Company: Love’s Labour’s Lost (King of Navarre). OFF-BROADWAY – New Light Theater Project: The American Tradition, & New York Theater Workshop’s Mind the Gap. He would like to thank his family and mentors for their love and encouragement, and his friends for their inspiring adventurous spirit. For more information on Martin and his upcoming adventures, feel free to follow him on Instagram @kmart171 and visit MartinKLewis.com.

Ellen will speak specifically about the process of working with a fragment of Euripides’ Protesilaus.