Research at the CHS Library 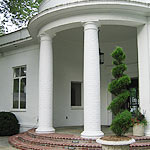 In its early years the Library was fortunate to acquire the private library of Werner Jaeger and large portions of the libraries of Arthur Darby Nock and Arthur Stanley Pease. These three scholars had all taught at Harvard University. James H. Oliver of the Johns Hopkins University also bequeathed materials to the Center. Because of these gifts, the collection contains many older editions of texts and rare copies of dissertations. Recently, books from the library of Sterling Dow of Harvard University have enriched the archaeology section. The classical papers of I.F. Stone have also been donated to the Center and are available to scholars upon advance request.

The Center’s Library contains over 65,000 printed volumes; approximately one-third of these are periodicals.  Currently about 1,000 books, excluding serials acquired through subscription, are added each year. The purchasing program allows for the acquisition of the most important classics titles published by American university presses in the United States, as well as titles published in other countries, including England, France, Germany, and Italy. Friends of the Library, many of them previous Fellows, are generous in their gifts.

The Center’s collection can be searched through the Harvard Library catalogue; new titles are listed as soon as they are catalogued. Like most academic research libraries in the United States, the Center follows the classification system of the Library of Congress.