Jacqueline Kennedy and the Classical Ideal 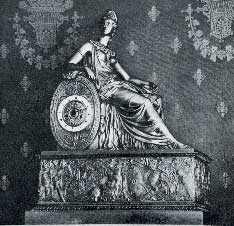 Figure 1: The Minerva Clock, purchased in 1818 by Monroe, restored to the mantel of the Blue Room fireplace. Image courtesy of the John F. Kennedy Museum White House Historical Association.
But viewers were not as captivated by the historic relics as they were by Jackie herself, who put the class in “classical” with her youth, unassuming charm, and grace. For the first time she revealed her sense of theatre and her understanding of the symbolic connections between form and function in her dress and mannerisms.
Oleg Cassini wrote that in 1961 American fashion was nowhere. European—especially French—haute couture, which had been embracing classicized forms since the 1790s, held a monopoly that Cassini (despite being born in Paris and educated in Italy) wished to break. Cassini called Jackie a “geometrical goddess,” with “classic features—long neck, sphinxlike eyes, slim torso, broad shoulders, narrow hips and regal bearing—the perfect form for his “new” American-International architectural style, which he called “A-line” [20] (see fig. 2). These clothes not only made the woman, but the woman made the clothes. Jackie designed many of her own outfits and knew how to wear the clothes, how to stand, how to move in the clothes so that her classical sources shined through. 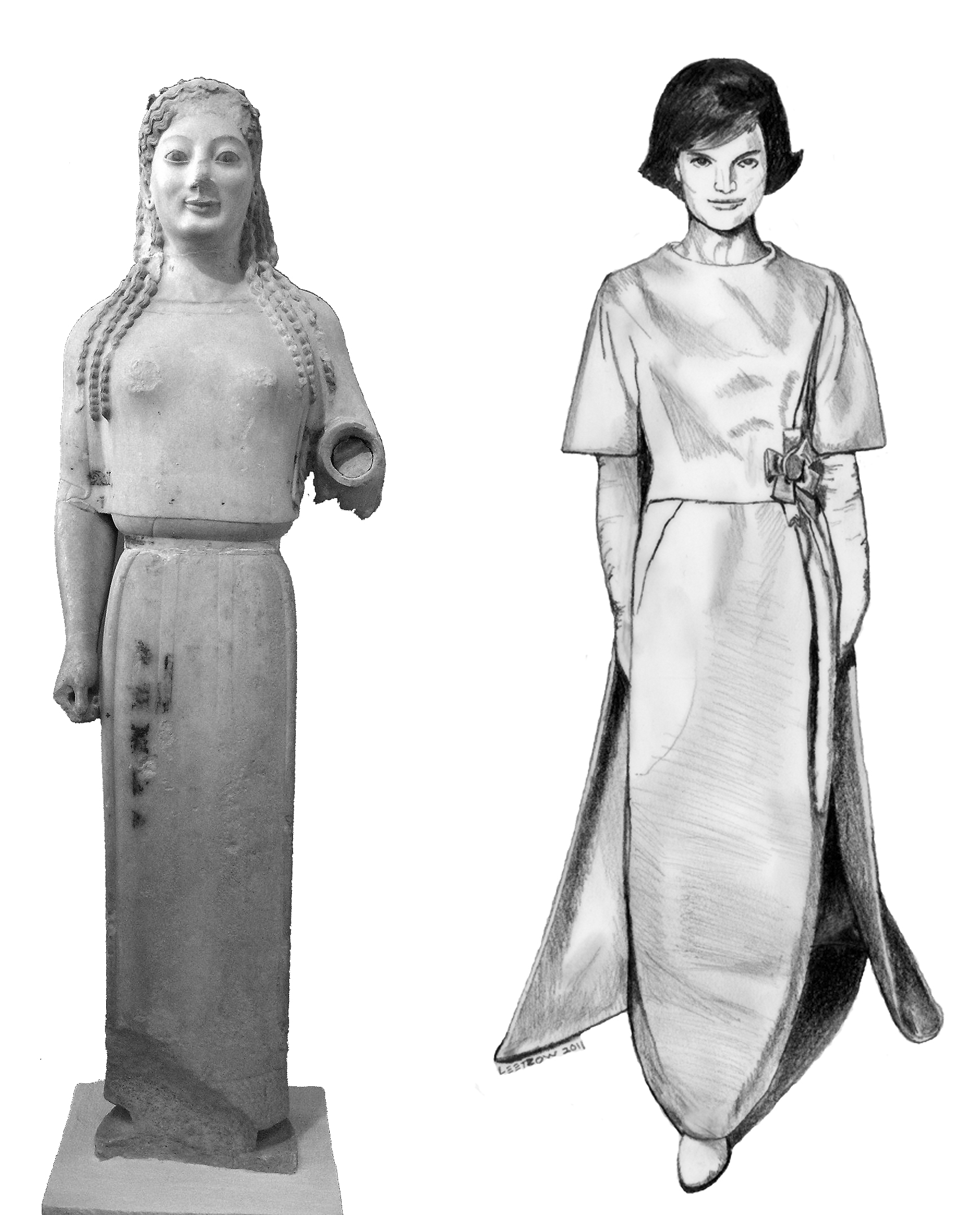 Figure 2: left – Peplos Kore. 530 BCE. Acropolis Museum, Athens. Image courtesy of the University of Texas at Austin webpage: http://ccwf.cc.utexas.edu/~bruceh/cc307/archaic/images/061.jpg; right – Jacqueline Kennedy in her inaugural gala gown made of ivory silk satin twill. Illustration courtesy of Larry Leetzow. © Larry Leetzow, 2011.
The A-line was very much a revival of the 18th-19th century neoclassical (see fig. 3); though Cassini frequently made reference to Egyptian fashion and the Nefertiti-style, the clothing that he, Valentino, and Halston designed for Jackie were clearly not pharonic, but rather inspired by the archaic, classical or ptolemaic, merged with eastern iconography [21] (see fig. 4). 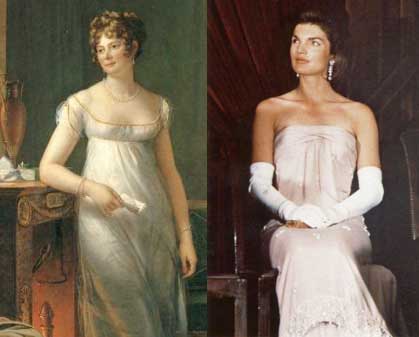 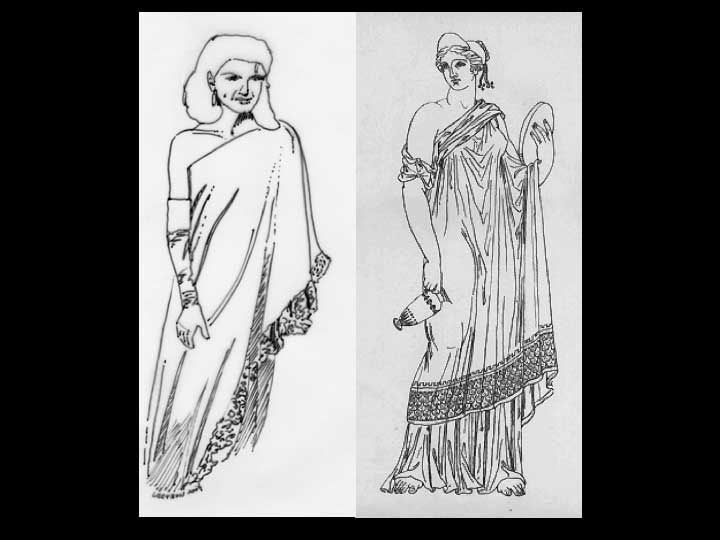 Figure 4: left – Jackie wearing a one-shouldered gown designed by Valentino, worn on an official 1967 trip to Cambodia. Illustration courtesy of Larry Leetzow. © Larry Leetzow, 2009; right – Figure with chiton and himation. Smith, J. Moyr. 1882. Ancient Greek Female Costume. London: Sampson Low, Marston, Searle, and Rivington. 37. Image courtesy of University of Kentucky webpage: http://www.uky.edu/AS/Classics/agfc-moyrsmith.html.
Jay Mulvaney, author of The Clothes of Camelot, explained that “Jackie approached the task of wardrobe creation with a serious discipline—it was a public image that she would forge, an image that would be the distaff counterpoint to the words and actions of her husband.” [22] Let us begin with what Jackie wore to the inauguration: A Cassini designed straight wool coat of a neutral greige color and pillbox hat created by Halston that would become iconic. The hat, a simple (if you will) pincushion shaped echinus, tops off her columnar ensemble that complements the architecture of the west facade of the neoclassical Capitol building, which rose behind the podium. In it’s simplicity, the pillbox hat is at once a Doric Order element representing the same architectonic control and restraint we see in Archaic Greek sculpture—a crown suitable for an Archaic Greek kore or a First Lady (see fig. 5). 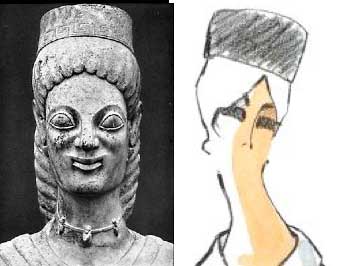 Figure 5: left – Berlin Kore, from Keratea, Attica. c. 570-560 BCE. Marble. Staatliche Museen, Berlin. Credit: Art Resource. © Bildarchiv PreuBischer Kulturbesitz.; right – Drawing of Cassini designed white coat dress and pillbox hat. Image courtesy of Oleg Cassini, Inc.
With classical allusions in visual imagery here and throughout her tenure as First Lady, Jackie intended to bring the cultural and artistic elegance of old Europe to the US and further JFK’s own Periclean vision of an America that was the education of the world. She preferred stiff shiny fabrics, the structured minimalism and precisely tailored “covered-up” look of drapery, [23] but for one of the most important public events hosted by the White House, Jackie chose a Cassini designed Greek peplos (see fig. 6). 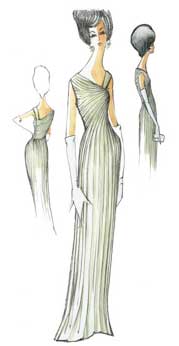 Figure 6: Oleg Cassini’s drawing of Jackie’s “Grecian-style greenish-gray mossy colored gown in soft jersey,” worn at the White House dinner honoring Nobel prizewinners of the Western Hemisphere, 1962. Image courtesy of Oleg Cassini, Inc.
In April of 1962 Jackie hosted, along with the president, the first ever White House dinner honoring forty-nine Nobel prize winners of the Western Hemisphere. For the occasion she had suggested to Cassini that she be draped à l’antique—a sea-green jersey fabric that he described as a “liquid columnar dress suggestive of ancient statuary.” [24] Her hair was prepared in wig-like fashion; the whole ensemble and the way she carried herself revealed her sense of the theatric power of classical sculpture (see fig. 7). Seated in the front row with the President during that evening’s performance by Pablo Casals, Jackie’s innate sense of classical style can be seen in her posture, as she leans over to talk to Robert Frost: in the style of classical relief sculpture, her torso remains facing forward while she turns her head to the left (see Fig. 8). 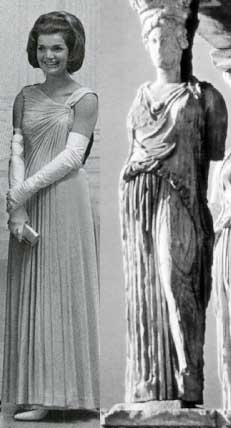 Figure 8: left – Apollo and Artemis on the East Frieze of the Parthenon. Image courtesy of the American School of Classical Studies at Athens. © Alison Frantz; right – Jackie in her peplos, speaking to the poet Robert Frost at the White House dinner honoring Nobel prizewinners of the Western Hemisphere, 1962. Image courtesy John F. Kennedy Presidential Library and Museum webpage:http://www.jfklibrary.org/Asset+Tree/Asset+Viewers/Image+Asset+Viewer.htm?guid={FB9E813D-C577-4920-83EC-564D98F9AB29}&type=Image.
For art historian David Lubin, author of Shooting Kennedy: JFK and the Culture of Images, Jackie was the embodiment of cool, self-effacing, and self-restraining neoclassicism. She was “the conservative force, favoring balance, restraint, the rule of tradition and the privileging of an aristocratic elite.” [25] In an age when celebrities and the powerful worked more closely with the press (or, let us say that the press was more accommodating and willing to suppress and conceal sensitive issues, such as JFK’s sexual indiscretions or Jackie’s smoking), photographers often consulted with Jackie and allowed her a large degree of artistic control over the published images of herself and her husband so that their message remained consistent.
One of the most striking examples of a collaboration between photographer and subject to create a vision can be seen in the portrait of Jackie and her daughter Caroline created by Jacques Lowe in a 1958 photo session at the White House. Hamish Bowles, European editor at large of Vogue and curator of the traveling fashion exhibit Jacqueline Kennedy: The White House Years, organized in 2001 by the Metropolitan Museum and the JFK Presidential Library, wrote that the red fuchsia silk dress worn by Jackie in the famous photograph “exaggerates the principle of the overblouse dress and unfitted line that Jackie endorsed, creating a dress with a structure all its own that becomes a carapace standing away from the figure.” [26] Most impressive is the composition of the portrait, noteworthy for its resemblance to the 4th century BCE Kephisodotos sculpture of Eirene and Plutos, originally commissioned in bronze by the Athenians around 370 BCE to celebrate the inauguration of a Cult of Peace in Athens (see Fig. 9). Note the intimacy created by the eye contact between mother and child, the right arm of the child reaching up to the mother. Both images are the same symbolic expression. If the allegory of the Kephisodotos pair expresses the idea that “peace brings forth and nurtures the growth of wealth,” [27] then might we say the same about beautiful Jackie and Caroline, the cherub with the I Can Fly book in her hand? 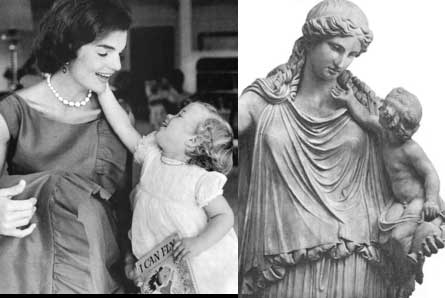 Figure 9: left – Jackie in a fuschia silk ruffled shantung designed by Givenchy, with her daughter Caroline, 1959. Credit: Jacques Lowe. © Jacques Lowe Photography; right – Sculpture of “Eirene and Ploutos” (Roman copy of an original of c. 370 BCE.) Staatliche Antikensammlungen, Munich. Credit: Image courtesy of Lahanis webpage: http://www.mlahanas.de/Greeks/Arts/Classic2.htm.
JFK’s assassination in Dallas on November 21, 1963 turned a human whom many around the world already worshipped into a true cult hero. Like Andromache mourning Hector, or Aspasia mourning Pericles, Jackie’s lamentation was a private pain made public (see Fig. 10). Jackie facilitated Jack Kennedy’s transition from hubristic mortal to cult figure, “rescuing him,” as she put it, “from all the bitter people who were going to write about him in history.” [28] Immediately after Jack’s murder, she refused to remove her bloody clothes, crying “let them see what they’ve done.” [29] Jackie was the khoregos of this Greek tragedy. 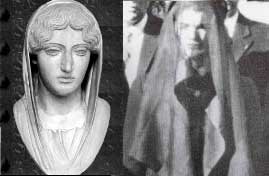 Figure 10: left – Copy of bronze head said to be Aspasia, Mistress of Pericles, c. 460 BCE.  Paris, Louvre Museum. Credit: Photograph Barbara McManus. Image courtesy Barbara McManus webpage: http://www.cnr.edu/home/bmcmanus/aspasia.jpg; right – Jackie at the funeral of John F. Kennedy. Image courtesy of geocities.com webpage: http://www.kennedy-web.com/jfkfuner.jpg.
It was a public funeral she directed for JFK, with her by his side as poluponos—the vessel of pain, the bloodied witness, a Penelope refusing to hide her grief. At the procession Jackie insisted, against custom, on walking behind the coffin, creating a security nightmare. [30] But she was intent on fulfilling her role as the veiled widow of her hero warrior.
Plutarch wrote that Pericles deserves admiration not only for “the sense of justice and serene temper he preserved amid the many crises and personal hatreds that surrounded him,” but because he was possessed of a “character so gracious and a life so pure and uncorrupt in the exercise of sovereign power that he might well be called Olympian” (Plut. Vit. Per. 39). The same was said of JFK by T. H. White, who wrote that Jackie’s characterization of the administration as ‘Camelot’ was a “misreading of history…Camelot never existed; for it was instead a time when reason brought to bear on public issues, and the Kennedy people were more often right than wrong, and astonishingly incorruptible.” [31]
In his remarks at Amherst College one month before his assassination, JFK said “I look forward to an America which commands respect throughout the world not only for its strength but for its civilization as well.” [32] He had wanted to make Washington “the showcase of our culture,” [33] despite the expense; he referred more than once to Lincoln’s insistence that in spite of the cost, the new Capitol dome, with its bronze goddess of liberty set upon the top, was an inspiration to the Union during wartime. [34] So it was with Jackie, who spent a scandalous $50,000 on clothes, [35] but “after she left the White House, Women’s Wear Daily reported that she probably did more to uplift taste levels in the US than any woman in the history of our country.” [36] She was a revolutionary in the strictest definition of the word, turning again to our classical foundations. In this way, Jackie herself “paved the way for the free and unconfined search for new ways of expressing the experience of the present and the vision of the future.” [37]