The Concept of the Multimedia Hero in Greek Civilization

November 2, 2020
|
Donum natalicium
back
Thomas E. Jenkins
I think it’s commonplace for every teacher of Greek to say that they’ve learned Greek twice: once as a student, then again as the teacher, barely keeping one step ahead of the pupils. When I first accepted the position as Teaching Fellow in Greg’s flagship Core Course at Harvard—The Concept of the Hero in Greek Civilization—little did I realize that I would not only learn Greek literature again (this time as teacher), but that I was to receive my own master class into teach. Greg has long been recognized as a leader in digital classics—see the article by Gregory Crane elsewhere in this Festschrift—but I’d like to stress how potently and innovatively Greg used media in his teaching, and how he adapted Heroes to every new wave of technology: from VHS tapes to DVDs to the internet and beyond. He was, and is, a pioneer in digital classics.
What separates Greg from, well, practically everybody is how he used media to enhance the classroom experience. Now, classics professors have been using clips from films in classes since the technology was available, but often from (more-or-less) straightforward adaptations of classical literature, like Helen of Troy(1957) or Oliver Stone’s Alexander(2005). Given the laughable nature of some contributions—like, say, Troy(2004), with its pornographically-buff Achilles and its soap operatic plot—I’d wager that most of us employ such clips as comic relief: pop cultural appropriations to be mocked when weighed against the majesty and artistry of the Greek originals. Occasionally, there is potent pedagogy to be had by pointing out the factual or cultural errors: my colleague (and fellow Greg-o-phile) Corinne Pache regularly uses the opening moments of the NBC Odyssey(1998) as the perfect example of modern ideas superimposed on antiquity. (The producers obviously thought it would be lovely to have Odysseus midwifing his own child, Telemachus; it is equally clear that such initiative would have been incomprehensible to the archaic mind.) And what’s not to love about watching, say, a gay Claymation version of the Iliad (1995) in a more general survey of Greek literature? It keeps things fresh and lively.
But that’s not how Greg used media in his own course; indeed, showing clips from an adaptation often elicited from Greg the soft, plaintive cries of “Oh dear. Oh. Dear.” For Greg, there was little use in showing adulterated or mangled versions of e.g. Homer or Euripides: why subject students to badness simply for the sake of performing our own inherent superiority to the material? Instead, Greg used media to teach ways of reading, of linking the visual with textual, or the semiotic with the explicative. So, for instance, Greg typically started Heroes by playing the opening scene of Scorsese’s Casino (1995), in which the main character—played by Robert DeNiro—is seemingly blown up by a car bomb, an explosion that hurls him through space in a fireball, accompanied by the final movement of Bach’s St. Matthew’s Passion, a mass for the dead. As Greg explained it, the compensation for death in Casino is remembrance through a masterpiece of music (in this case, Bach’s Passion); likewise—and you can see this literary maneuver coming—the compensation for Achilles’ death (in Homer) is remembrance through a masterpiece of archaic music: the Iliad. It’s a bravura moment of teaching and analysis: there’s nothing more exciting than a car bomb (!) and, in a sense, nothing more exciting than Iliad 18-22, though the excitement is rather more difficult to generate in undergraduates, at least initially. By linking music to narrative, Greg demonstrates the crucial links between archaic notions of death, remembrance, and lament. Thus Greg’s introductory lecture on the Iliad—preceded by three minutes of Casino’s car-bombing—literally begins the course with a bang.

Often, Greg uses film to show how narrative—any narrative—works by means of deeper structures and techniques, including metonymy, compression, expansion, and metaphor: these are notoriously tricky concepts to teach to undergraduates, particularly in textually-based classes. Greg reasoned that students might grasp these concepts more quickly if they were first demonstrated in visual medium: today’s undergraduates often grasp complicated notions more quickly via film than via text. So the concluding minutes of the Bette Midler vehicle The Rose (1979) demonstrate a whole host of Sapphic poetics: there’s form (a priamel, exactly like Sappho 16); there’s metaphor (love and women are like flowers, specifically a rose: again, this has a host of Sapphic connotations); and there’s metonymy, as Bette Midler/Janis Joplin collapses on stage to her death: “The Rose” thus becomes her epitaph, and juxtaposes eros and thanatosin ways that strikes the reader as peculiarly Sapphic. (The famous poem Sappho 31, “He Seems to Me Like a God,” describes death and orgasm simultaneously.) 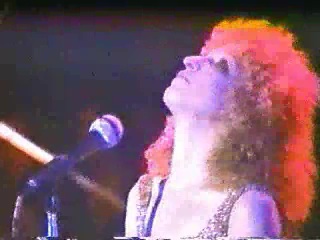 Likewise, a celebrated sequence from Kubrick’s The Shining works as an excellent introduction to Aeschylus’ Oresteia—particularly to the ways in which images are created, spliced and manipulated in the service of a more expansive, linear plot. In the film—based on the Stephen King novel—Danny, a young boy, has a gift of the “shining,” a type of clairvoyance. When his family moves into the Overlook, a deserted ski lodge, Danny experiences his first intimations of the secret murders that once took place there: in a dazzling montage, Kubrick cross-cuts between an hallucinating little boy (Danny) and the figures of two murdered little girls, spectral and spooky. As the rate of juxtaposition increases, an elevator door opens, revealing not a passenger, but a cascading tidal wave of blood that floods the hall, the walls, and eventually—in a bravura moment of film-making—the eye of the camera. Danny’s “shining” moment ironically morphs to inky blackness just as his vision is swallowed whole by the horrors of the house. In Aeschylus’ Oresteia Cassandra, the captured war-bride of Agamemnon, experiences a similarly shining moment: in a scene that works almost entirely on the level of the image Cassandra screams that she is being brought not to a palace, but to a charnel-house: “[I am being dragged to] a god-hating house, that knows the butchery of its own kin: a house that kills men, and that swims with blood” (ll. 1090-1092). By linking image to plot Greg showed that the two concepts are not mutually exclusive: in a plot that concerns (among other things) the travesty of sacrifice, the hyperbolic “shining” of Cassandra is crucial to the architecture of the Agamemnon in the same way that the past haunts the present—and the future—of Kubrick’s Overlook. 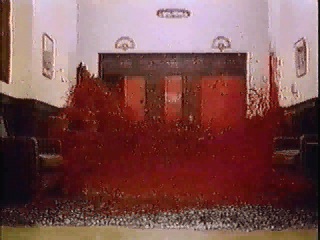 Greg is at his most mischievous when pointing out the flaws in current contemporary discourse about ideology and metaphor, thereby demonstrating to the students the pitfalls inherent in the glib analyses of mass media. One prized clip is from NBC’s coverage of the opening ceremony of the Barcelona Olympic games in 1992; since Barcelona was, in myth, founded by Herakles, the Barcelonans crafted a really eye-popping spectacle involving Herakles’ trip across the Mediterranean and the hero’s eventual creation of the Strait of Gibraltar. Unfortunately, the clip is narrated not by classicists—or cultural theorists—but by sportscasters, who manage to promulgate every hoary cliché about classical antiquity (while adding a few of their own). Lauding Hercules as “always victorious in his battle against evil”—this of a hero who dismembers his wife and children in Euripides’ play Herakles the Mad—the broadcasters are even more ill-at-ease with the very notion of mimesis, of the re-creation of myth on stage. Thus, an oversized, mechanized puppet of Hercules “is surrounded metaphorically by athletes, wise men, warriors, and artists. They are supposed to represent the best of the human race.” What leaps out from this text—besides the oddness of hearing the word “metaphorically” from a sportscaster—is the inclusion of the word “supposed” in the next thought: it’s clear from the narration, and the tone, that the broadcasters don’t really buy this idea of metaphor. Yes, these actors are supposed to represent athletes, wise men, and the rest—but clearly, they’re just actors and the mimesis is a total flop. But that’s because the sportscasters haven’t figured out that the stage of the stadium really is a stage in the Aristotelian sense: a site of ritually-inscribed mimesis ‘representation.’ The sportscasters are confused by this new definition of space: after all, for a sportscaster on the field, a human doesn’t represent a quarterback, he is a quarterback. The idea that a human could represent anything else—which is the fundamental cognitive leap that allowed the creation of drama—is completely foreign to the world of sports-casting. The mass media coverage of the games thus allowed Greg to both explore the concept of mimesis as spectacle while commenting on the modern misapprehensions that surrounded the very idea of metaphor. 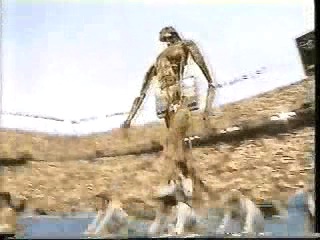 Sometimes, Greg explores difficult ancient concepts—concepts with no clear modern analogue—through extraordinary moments in film-making: the notion of sparagmos, ‘ritual dismemberment,’ for instance. Greg has managed to find an extraordinary number of these moments in film, from the hero Sebastian’s grisly death in Suddenly Last Summer (1959), to the robotic ballerina’s murder in Tales from Hoffmann (1951), to the movie poster for the horror film I Dismember Mama (1974). (Years after students may have forgotten other details of Heroes, they are sure to remember Liz Taylor’s hair-curling scream during a sparagmos!) Or sometimes Greg focuses on the numinous aspects of ancient tragedy: another essential, but difficult concept of stagecraft. The power of the Oedipus of Colonus—in which Oedipus simply disappears, leaving behind just one, traumatized witness—is tough to get across to undergraduates; but Greg has found an excellent modern parallel in Peter Weir’s The Picnic at Hanging Rock (1975), in which school girls suddenly disappear on the spot of an Aborigine holy site, as they leave behind a solitary, transformed witness. Suddenly, the students ‘get’ how the end of Oedipus at Colonus is not really about Oedipus, per se, but about the power of “witnessing,” and of initiation in sacred space; the important word of the title is not Oedipus but—surprisingly—Colonus. And it’s that kind of lateral thinking—and innovative use of multimedia—that has yielded such rich dividends in Greg’s core course.
When I first started teaching for Greg, in 1995, Greg had been using VHS tapes for years; they had almost disintegrated with age. In 1996, when I became head Teaching Fellow, Greg became one of the very first professors at Harvard to launch a fully integrated web-site, keyed to the syllabus, and with gobs of multimedia content. It’s hard to believe now (in 2012), with our present addictions to Facebook and YouTube and Hulu.com, that a website with video was ground-breaking: indeed, it was computer– and browser-breaking, as we discovered the very real limits of file sizes, and codec compatibility, and other technological obstacles to pedagogical success. But Greg—and the indefatigable Alexander Parker, of the Instructional Computing Group at Harvard—soldiered on, and produced a breakthrough in teaching the concepts of Greek civilization to undergraduates, by employing (what was then) sophisticated technology in the pursuit of (what now still stands as) sophisticated cultural analysis. Many of Greg’s juxtapositions and examples are now available in the ‘online’ version of Heroes, archived at the Center for Hellenic Studies’ website here. [1] The most lasting legacy of Greg’s adventures in multimedia will likely live on in the hearts, minds, and hard drives of several generations of “Heroes” teaching fellows, who learned from him the techniques and tools for teaching Greek literature with a maximum of innovation. And though I’ve focused on Greg’s use of multimedia, anybody who has witnessed Greg on the stage of Harvard’s Sanders Theater—holding court with hundreds of undergrads—knows that Greg’s most formidable pedagogical tool is as old as Greece itself: the power of engaged, passionate performance in front of a live audience. And that, perhaps, is the most effective lesson, and concept, of them all.